About a couple of years ago, my wife and I planned this big, blowout European vacation. Paris, Venice, sights, food, romance, life; the works. Then, a month or two before we were due to take off, we found out that we would be moving to Miami around that same time. So, we now had to cancel the vacation.

Most of the bookings we had made were either fully or partially refundable, so we were able to cancel most things without penalty, via refunds to my credit card. About half of the refunds came through one month, and the other half the next month. Since it was a lot of money, each month my outstanding balance was completely covered by the refunds. Therefore, I did not have to “pay” the credit card for a couple of months. Ok, cool.

A few weeks later, amidst the stress of moving, I got a short, nasty letter from the bank. It said that my last two statement balances had been completely paid for by merchant credits, and that if this happened again, my accounts would be forcibly closed. No explanations, no pleasantries. Just a threat.

Equal parts angry and worried, I called the bank, whence I was bounced around between representatives until one finally told me that the credits had raised a red flag under anti money laundering rules, since my behavior could be seen as part of the money laundering process. I explained that this was just a cancelled vacation; she seemed to believe me and wrote it down in my record. I never heard anything about the matter again.

What I learned, though, is that even completely innocent and explainable behavior can get you in trouble with your bank. Having it close your accounts under anti money laundering rules is not the end of the world, but it can affect you. You would have to go through the hassle of reopening them elsewhere, plus I would not want my bank record to say that my accounts were forcibly closed because of anything suspicious. Also, I’m pretty sure that your credit report would show that the account was closed by the bank, rather than the customer. Not good.

So how do you avoid having your innocent activity look suspicious? Just watch Neflix’s Ozark (kidding, though it’s a pretty good show).

In all seriousness, start with taking heed of where you live. As Doctor of Credit reports, not all banks’ anti money laundering (AML) policies are created equal. Specifically, if you are in an area designated by the US Treasury Department as a High Intensity Financial Crime Area (HIFCA), your banks will have stricter policies. You can see the current, specific areas here but, broadly speaking, they are: 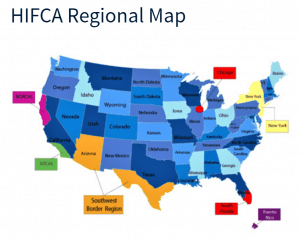 From the US Treasury. Basically, everything that’s not blue is a HIFCA. (Sorry if it’s a little fuzzy but the source map is blurry).

Bearing this in mind, the big idea is to avoid unusual behavior. The more unusual your behavior, the more it can be seen as part of the money laundering process, especially if you’re in a HIFCA.

Here’s an educational video, if you prefer that format:

So What Is Unusual Behavior?

Basically, anything unusual. Yeah, not very helpful. Let me try again. Some possible examples are:

Obviously, AML policies and triggers are secret (otherwise, criminals would know exactly how to avoid them), so I’m doing some semi-educated guessing here (and I don’t want to do lots of internet research on it and trigger something myself). What I can say is that I accidentally stumbled onto an AML trigger when I got my vacation refunds. I can also say that big deviations from your usual banking patters (especially if you are in a HIFCA) would probably put you at risk of tripping over an AML rule as well.

Obviously, you don’t want anyone to think you’re even close to the money laundering process. So, it might be a good idea to be proactive and call your bank ahead of time to let them know of any unavoidable upcoming unusual activity, just like you might call your credit card issuer to let them know if you’re going on an international vacation. It also makes sense to me to avoid, as far as possible, financial transactions using cash, money orders or other hard-to-trace instruments. I’d go with checks and things that leave a clear paper trail of where the money comes from.

Have you accidentally run across any AML or similar triggers?

*Credit: Commenters Mimi and Reubenfairibrd at Doctor of Credit